This Is Not A Hoax - TRUTH Coming Soon! 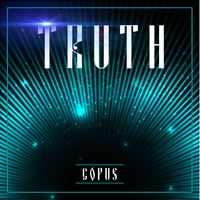 One day when I was a teenager my mother came home from her philosophy class all excited about discussing truth for 2.5 hours. My father, an engineer, said: “That’s ridiculous. Truth is not telling a lie!”

But is it that simple? Fake news. Social media confrontations. Black lives matter. Cell phone documentation of the police. COVID-19. What is truth?

COPUS is a melodic rap ensemble that has addressed these concerns for 20 years. The combination of melodies and rhythms mixed with spoken and sung words to elicit thought has been the focus of this San Francisco band since its inception. Audiences – whether live or virtual – have been entertained, educated and uplifted by the quest for truth, beauty, and spiritual awareness despite everything.

The single TRUTH is scheduled for release July 27. It could not come at a more appropriate time. “When you feel the truth as it stares in your face and all you see are lies running rampant in space – do you rise to the occasion and get up on your feet or do you sink in the pit and let them cause you defeat?” With lyrics and music by Wendy Loomis and poetry by Royal Kent, COPUS bassist Patrick Mahon and drummer Levon Washington added their wizardry to the creation and TRUTH was born.

COPUS has earned nominations and awards for their excellence from ASCAP, the Hollywood Music and Media Awards, and the Clouzine International Music Awards. They have performed throughout the U.S. at such notable venues as The Bitter End and Feinstein’s 54 in New York, the San Francisco Jazz Center, the World Bank in Washington DC, and the Cutting Edge Festival in New Orleans. TRUTH is their seventh release; it will be in the 2020 contention for ‘best melodic rap performance’ by the Recording Academy (GRAMMY Awards).

“COPUS is a musical group with some of the most talented musicians that I have yet come across. The music is a mixture of Spoken Word, jazz, a touch of blues and a hint of classical styles. This music is a little difficult to compare to anyone else because I have never really heard anyone like this group. The jazz styles are very complex and the music that is created is absolutely masterful. These compositions are amazing with just the music, but then you get the added pleasure of the smooth spoken word vocal styles of Royal Kent.” ~Michael Allison, MusicDish.com

TRUTH is available at copusmusic.com/truth as well as on iTunes and Spotify.